Discovering What Web3 Really Means (and What it Doesn’t)

A guide to understanding Web3 from the ground up with Ocavu founder and CEO Jon Cheney.

Although everyone interprets Web3 in different ways, what we do know, that helps us define it, is that there’s constant shifts and improvements. The below details Web3 as it is now, and a definition from experts in the industry.

The Buildability of the Web 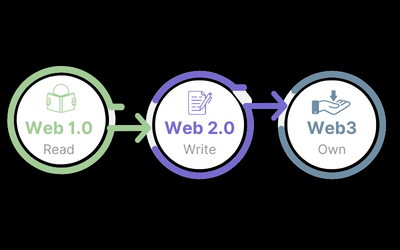 Let’s begin by talking about what the perception and reality of each iteration of the web has been. Starting with Web 1.0, this was the read-only version of the internet. Companies could post catalogs and brochures to reach anyone, anywhere, bringing new levels of connectivity no one had seen before.

Web 2.0 brought in the layer that is often associated with social media. But Web 2.0 contributed so much more as it ushered in the ability to generate user content. The internet was no longer one sided, communication could go both ways.

The last layer, Web3 is the ‘own’ layer bringing us to read-write-own. By definition, Web 3 is –

“Web3 (also known as Web 3.0) is an idea for a new iteration of the World Wide Web which incorporates concepts such as decentralization, blockchain technologies, and token-based economics.”

But there’s so much more to Web3 than that.

Another term that’s important to fully understand Web3 is the semantic web. Basically, the semantic web is an extension of the web that aims to make data machine-readable. This would allow any program, metaverse and blockchain to be able to talk to each other and not just to themselves. So, does that mean that Web3 is the program, metaverse and blockchain?

Blockchain is inherently Web3 but Web3 is not inherently blockchain. For example, you can make a Web 2.0 or Web 1.0 database that can be blockchain compatible simply by opening the end points to allow readability.

Something that is often associated with Web3 is NFTs, and Web3 is not just NFTs either. Many NFTs are in a closed ecosystem and cannot be transferred to other programs and metaverses so they don’t always meet the definition of Web3.

We now know what Web3 isn’t but that doesn’t tell us what Web3 is. A great word to truly describe the essence of Web3 is decentralized. A decentralized community must be built to be open and readable with endpoints that connect to other platforms. This allows not only readability but for the internet to become more automated and interconnected.

So, blockchain is not always Web3, but it can be Web3 because Web3 can be built to be open.

With all of that being said, we would define Web3 as a decentralized ecosystem built to be open and machine-readable to foster interconnectivity.

What are the Benefits of Web3

Other than being able to have interconnectivity with other platforms, Web3 increases community value as it has higher engagement for your users. Since Web3 is built on the blockchain, you can buy and sell safely. With Ocavu’s Web3 tools, you can truly own your community.

Book time with an expert to find the perfect tool to start (or improve) your own Web3 ecosystem.